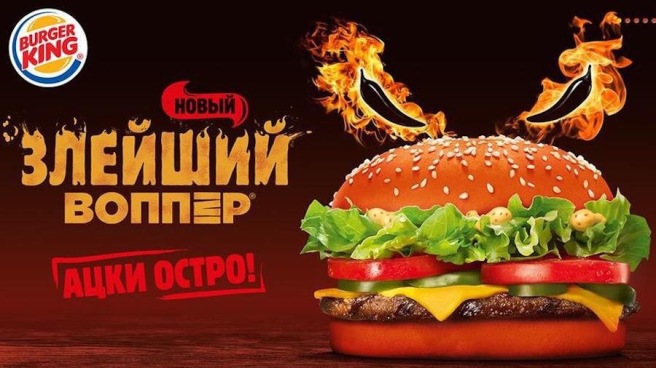 And just when you thought things couldn’t get any more sad / pathetic / weird / stupid, etc… Burger King Russia decided to “celebrate” Trump’s victory with a new sandwich called — what else? — The Trump Burger.

And what the hell goes in the Trump Burger?

Well, I’m glad you asked. It is made of whatever stuff usually goes on these things; the only difference is that you cannot order any hot sauces or food of any kind that would remotely remind you of Mexico.

I’m genuinely confused about this, though, since the promo (above) shows a couple of spicy chiles, which one would think are kind of Mexican-origin thingys. But just like it is with the whole Trump presidency nightmare, I have given up trying to understand what the hell is going on anyhow.

Now if you’ll excuse me, I’ll go throw up…

Burger King has a secret weapon to sell more salads. They are hot and they are Latinas.

Watch Sofía Vergara and Salma Hayek flaunt their cute accents and other attributes to get men go crazy for some greens.

And here’s your Salma Hayek pitch:

That’s it! First it was Burger King, then South Park. And now Schweppes is reportedly using a sombrero-wearing Mexican fellow suffering from swine flu to pitch their ridiculously refreshing beverages! Wanna seat on the tube? Grab a box of kleenex and a giant sombrero and off you go!

(It is likely that this “ad” was born and lives only in the bowels of the Internet… but if it’s a real Schweppes campaign, I CANNOT wait for the ensuing outrage and lame apology by some agency!)

It seems that mainstream media and marketing gurus are getting their kicks making fun of poor, defenseless Mexicans.

On the heels of the Burger King Texican Whopper fiasco, comes yet another public “offense” against the Mexican people; this time from our friends enemies at South Park. The episode shows an embarrassed Felipe Calderón grilled on what his government has done with all foreign aid –presumably granted by extraterrestrials.

[Little do they know Mexico’s government does wonders with that money, including bringing beaches and ice skating to the masses. Fighting crime and drug lords? Well, that can wait.]

p.s. I wonder how long it will take for some offended Mexican official with nothing to do to urge South Park to take down the episode…anyone?

It didn’t take long for Mexican cartoonists to take on the whole Burger King brouhaha.

What happens when you merge a tall, good-looking Texan man with a stocky, chubby  guy wrapped in the Mexican flag and wearing a wrestling mask?

Answer: you get a Burger King Texican Whopper, yet another “delicious” creation from the hamburger chain.

The print ad hails from Spain, and it pitches the new Texican Whopper, an impossible fusion of cajun sauce, cheddar cheese, meat taco and beans (!) The tagline, Unidos por el destino, means “Brought together by destiny.”

My sources tell me that Mexico’s ambassador to Spain, Jorge Zermeño, has already asked Burger King to take down the ad and apologize –apparently because it offends our already decimated flag, and not our cuisine.

But wait! there’s more: the Texican is also a hit in England and has its own TV spot: