I cannot help but think Raúl Salinas de Gortari is behind this –somehow.
Scary. But, heck, at least they’re gluten-free. 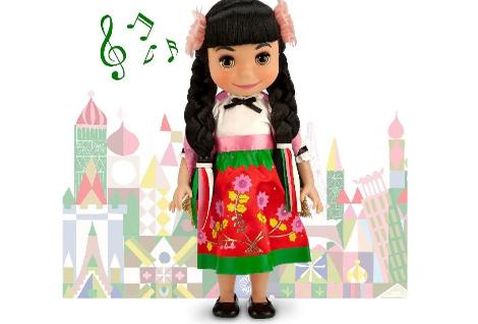 I have not had the pleasure yet, but according to Mexico’s Milenio newspaper, this Mexican doll is now on sale at Disney’s ‘Fantasyland.’ She is 16-inch tall, and apparently sings It’s a Small World in “Mexican”… or something like that.

There is nothing more satisfying than lying down on your sofa with  a good piece of literature and come face to face with the improbable: A two-page commercial for SPAM jalapeño, featuring an enlarged photo of what SPAM thinks is Mexican food.

The ad -which takes a full-page plus a one-third vertical in the April 2014 issue of People en español, includes everything you’d come to expect from made-believe Mexican food advertisements in the U.S., namely a jalapeño, a lime, a couple of plastic cactai and -what else?- a photo of Sir Can-A-Lot proudly shaking a pair of maracas.

What’s more puzzling to me, though is: Why is this ad in English and… do they really think my people would go for it? 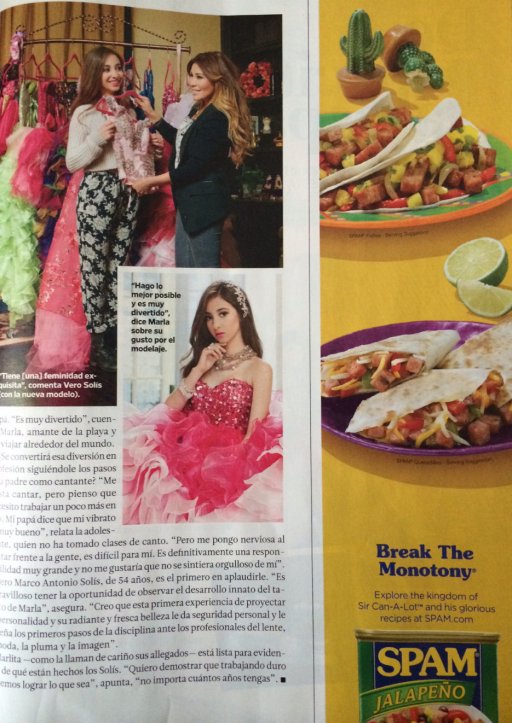 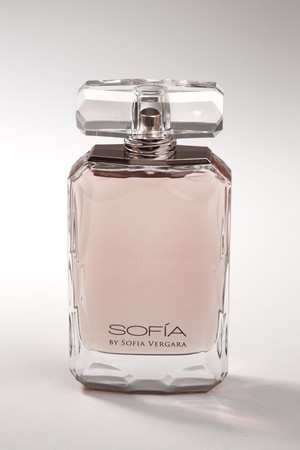 It has been a while since I bug you guys with Latino celebrities and their Latino fragrances, so bear with me.

A bit late, but not to be outdone by the likes of Paulina Rubio, Shakira, Antonio Banderas and even José José, the super-famous, super-rich, super-accented and super-ubiquitous Sofía Vergara is the latest Latina celebrity to announce her own fragrance, which will appear sometime in April in U.S. department stores.

In an inexplicably long article, Sofía Vergara told Women’s Wear Daily that her fragrance will have orchids and roses, not only because they are her favorite flowers, but because they are also Colombian.

“I wanted to bring a little bit of who I am, my ethnicity, where I’m from, and I thought it was very cool to be able to get flowers from Colombia actually into the perfume.”

I am sure she said all of this in an impossibly accented English, which is fine when you consider that is part of her charm and definitely the secret behind her many millions of non-ethnic money. 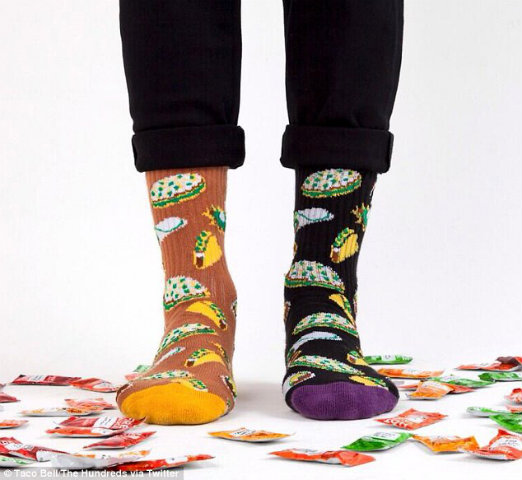 Taco Bell, the U.S. fast food chain whose commercials are way better than its food, has found a way to outdone itself by planning an entry into the apparel business.

Yes, my friends. For reasons I yet have to comprehend -and according to the always reliable source of information for serious, professional journalists (i.e. Twitter)- Taco Bell has partnered with @TheHundreds to create “a pair of Mexican food-inspired illustrated socks.”

Don’t get me wrong, Taco Bell lovers. While I understand your fervor about some of the chain’s gastronomical creations, including the Dori-Taco and the Quesarito, I just wanted to take a second to let you in on a little secret of mine: Pssssst, that ain’t no Mexican food, you know?

Regardless, I’m sure you won’t be breaking the bank here as I can almost assure you these fine stockings have been hand-crafted in China by adorable 5-year-old Chinese kids… Awwww.

Anyhow, for a more accurate picture of what Mexican food looks like, you can click here, here or even here. 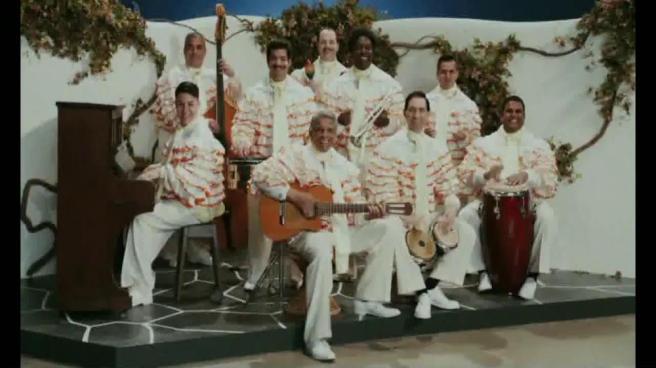 Only God knows how many ethnic groups and/or musicians are going to feel offended by this TV commercial for Little Caesar’s Deep Dish Combo.

Personally, I’m more offended by bad food and sugary sodas. But, heck, these guys make me wanna get up and dance! 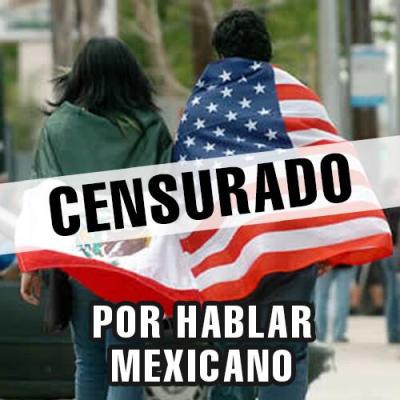 Earlier today, a couple of friends forwarded me a press release put out by Dallas-based Pizza Patrón pizza chain and urged me to do -or rather, write- something about it. The headline was attractive enough for me to pay attention:

At the heart of the matter was the refusal of “a number” of Spanish-language radio stations to air an upcoming radio spot for Pizza Patron’s new jalapeño-stuffed pizza. The reason? The name of such pizza, “La chingona” apparently does not sit well among executives at the radio stations and is considered un-apt for the good ol’ Latino family.

As a native of Mexico City, I grew up listening -and learning to master- all forms and variations of the noun chingada and the verb chingar. See? Growing up in Mexico, you don’t say “Damn it!” when things don’t go according to plan, you say Me lleva la chingada. Same when someone is getting on your case, you don’t ask him/her to bugger off, but instead say Chinga tu madre. When you are supremely awesome and superior (i.e. like yours truly) you simply say Soy muy chingona… etc. etc. The concept is so wonderfully rich, that even Octavio Paz wrote an entire essay about la chingada: Los hijos de la Malinche.

But I digress…  According to the aforementioned press release, Pizza Patrón was informed that its new ad campaign “would not be permitted to air on a number of major radio networks,” because the word chingona is considered a profanity and presumably would offend the Great Catholic -and Well-Behaved- Latino Family in America.

Oh so let me understand: The point is to forbid words like chingón or chingona on the basis that they offend consumers of Hispanic media; never mind we’re talking about some of the same media outlets that give us an almost naked TV host going into a hot tub with a scantily-clad celebrities at 4:00 PM (family time); a celebrity judge –in primetime– cross-examining a guy who loves to paint with his… penis and a sensationalist daily show hosted by a lawyer-turned-TV-star known for using poor people and humiliate them in the name of ratings.

Readers of my blog know I’m not fast-food’s best friend. In fact, I live a somehow happy life free of frito-stuffed sandwiches or jalapeño-stuffed pizzas. But to cry “profanity” for using a harmless, beautiful word like chingona in an ad campaign to tout a “chingona pizza” just makes me want to scream: 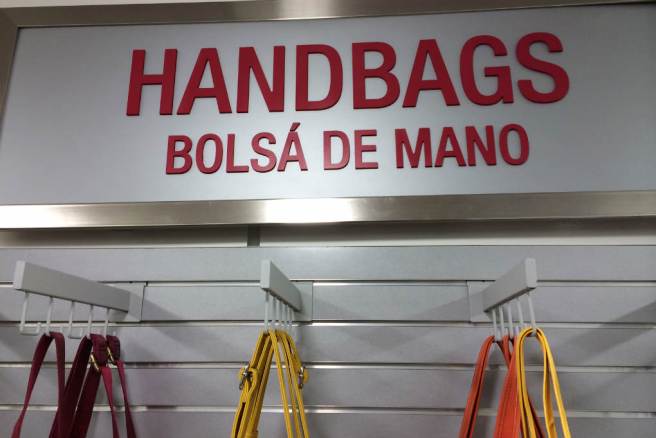 I think it’s nice of retailers to include Spanish-language signage in their stores. But if they are going to go the extra mile to include accents, they would be well advised to check a dictionary.

That shouldn’t be that hard, would it?

UPDATE: An earlier version of this post misidentified the store. The photo was taken at Burlington Coat Factory in New York City.

I am not sure what to feel when the staff of a Spanish tapas place asks me not to play with my “mono” while in the restroom.

I mean, after all, it’s the restroom and MY mono, right? Who are they to prevent such a thing? 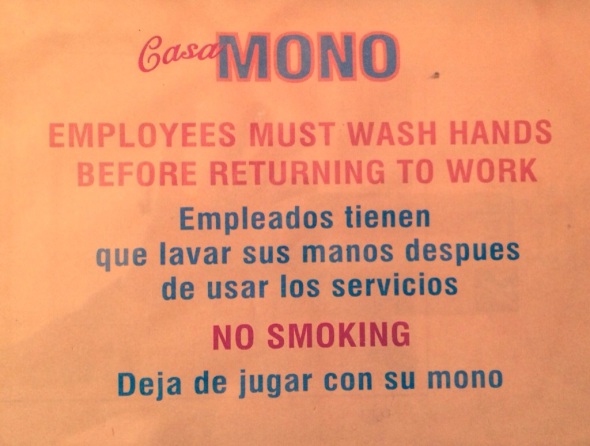 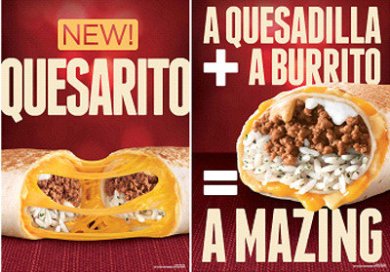 Just when I thought the height of ridiculousness had been reached with the Frito-stuffed Chicken Enchilada Melt and/or the Dori Taco, comes the Quesarito, a Quesadilla/Burrito hybrid.

According to Los Angeles Times –and for reasons I yet have to comprehend– the Quesarito is being tested only in Oklahoma City, presumably because Oklahomans were all cool about it and couldn’t tell the difference between one bad wrap and the other.

Also according to the L.A. Times, the Quesarito might not see the light of day outside Oklahoma. Thank God. 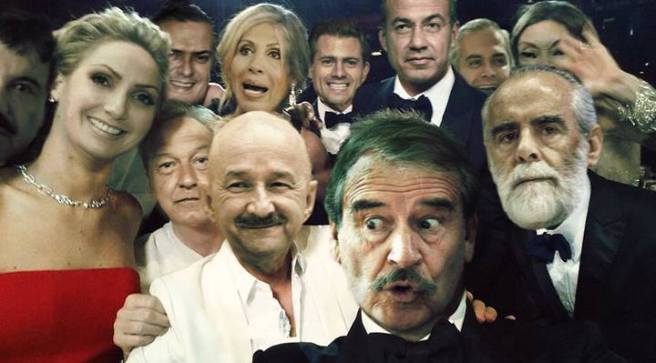 …Unless it decides to change its name, of course. 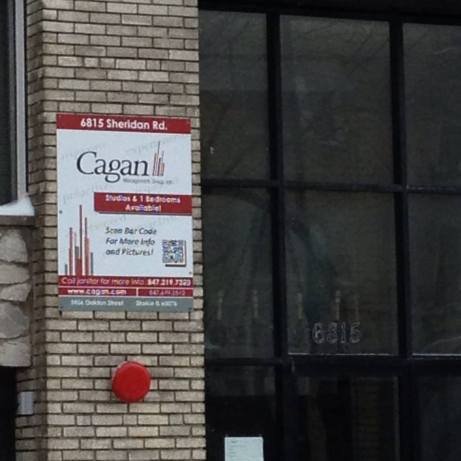