Dancing -albeit sans grace– and pretending to like Presidente beer. How else?

Dear readers: It is with great pleasure that I introduce to you a brand new section in this infamous great blog: The Headline of the Week, brought to you by…. well, no one would really sponsor this site. Ever.

But anyhow, what better introductory note than this one from Reuters (05/29/08)?

12-year-old Colombia-born Alejandro Ramírez is seeking your help in keeping him as far from Colombia as possible. The reason? Ramírez and his mom, now green-card holders, claim his biological dad and other family members in Colombia want him to go visit just to later snatch him and keep him there. Forever.

But the kid won’t take any of it.

“I know how dangerous Colombia is. I definitely don’t want to go to Colombia. I love the U.S.A. and want to stay here,” Alejandro writes in his very own personal Web page, aptly named SaveAlejandro.com

He also says he likes to watch TV, play video games, ride a bike and take Kung Fu lessons. And, as we all know, you cannot do any of these things in the jungle Colombia.

So, without further due, I am hereby launching SaveLaura.org, aimed at keeping myself safely here and away from the dangers and creepiness of my fellow Mexicans. Wanna help? I take most major credit cards, menos Amex of course! 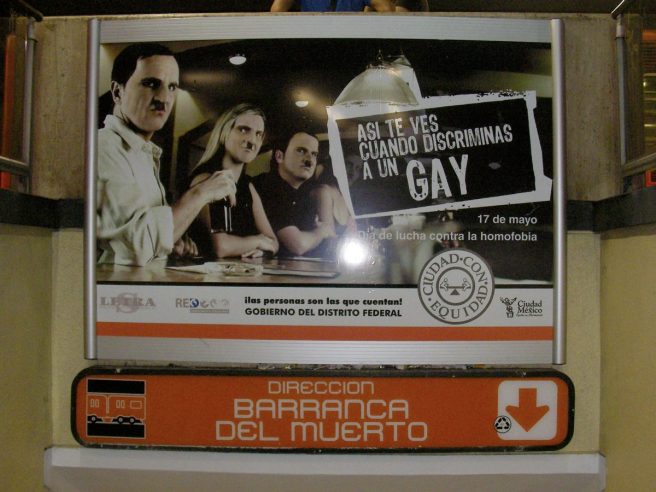 The local government of Mexico City has launched a new campaign against homophobia, featuring a series of outdoor ads like the one above plastered around the city’s subway system.

For the monolingual crowd: “This is what you look like when you discriminate against homosexuals. 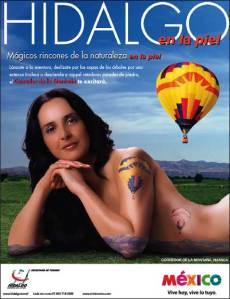 Here’s what happens when advertising fails to meet moral anthropological standards. The latest ad campaign to promote the wonders of the Mexican State of Hidalgo features telenovela star Irán Castillo showing some eye-popping attractions imprinted on her almost-naked body.

The campaign, titled Hidalgo en la Piel, has raised some hell in Mexico, but not because Irán is shown wearing very little clothing, but because the shooting around some protected areas was done without permission from the National Anthropology Institute (INAH).

“We’re not moralistic,” Benito Taibo, an executive with INAH told the New York Times. “We don’t have an issue with her. She’s a pretty girl.”

It turns out authorities don’t give a damn if Irán is naked or not. The issue here is the protection of Mexico’s patrimony. So next time your company considers Mexico to film a commercial, feel free to throw away the clothes… But, please, stay away from our Pyramids.

A reader of this blog -and fellow Mexico lover- forwarded this, posted on a fence outside a greenhouse in Ensenada, Mexico.

Translation (sort of) for the monolingual crowd: “Close the door behind you upon entering and exiting… Please, if it’s not such a drag. But even if it is, close it anyway.” 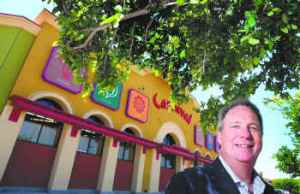 First there was Hispanic cheese, then, a dark-skinned, dark-haired Jesus miraculously appeared in a Texas church, making local residents dub him Hispanic Jesus. So, it was only a matter of time before someone came up with –what else?– Hispanic Shopping Centers!

Yes, dear readers: a real-estate developer in Dallas has been cooking up a business in what he calls a “burgeoning niche.”

“The company’s Sierra Vista shopping center in Oak Cliff is its model. It was revamped in 2006 with bright colors, an Alamo-style facade and a new retail mix including a Carnival market, a Bank of America branch and a Melrose women’s clothing shop that appeals more to Hispanic consumers.”

… an Alamo-style facade? How come nobody ever thought of that before? And to think that all this time I have been shopping in non-Hispanic malls… Sigh.

Oh, and can somebody tell me what on earth is a Carnival market?

I guess the closest, non-literal translation that really captures the spirit behind this sign -found outside a Mexican eatery- will be something like:

QuePasa.com has launched a nation-wide search for 12 Latina models who will appear in the 2009 Latinas Illustrated calendar which promises to be hotter than Dr. Manny’s Latin Diet.

According to the company, casting call will be held in Los Angeles, Miami, San Diego and San Antonio.

I suggest they hurry, while these tomatillo-eating beauties still look their best. You never know when the transformation will begin! 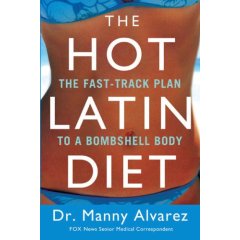 Finally, somebody has come forward with a sound explanation of why I don’t look like my gorgeous self back in Mexico City like 20 years ago.

A new book by Dr. Manny Alvarez The Hot Latin Diet: The Fast Track Plan to a Bombshell Body, claims to have studied dozens of Latinos who have seen their gorgeous bodies turn into chubby, disgusting flabs as soon as they hit American soil.

Excerpt: “Most families who immigrate from the Caribbean basin and other points of Latin America are fit and trim when they arrive in the United States; however, if you look at this same community three years later, they are usually overweight.”

To help counter such alarming trend, Dr. Manny includes in his book a series of recipes that include some “South American classics,” including avocados, garlic, tomatillos, cilantro, cinnamon and jalapeños…

Wait a second: I grew up eating lots of that stuff and -trust me- I am far from looking like the woman in the blue bikini. 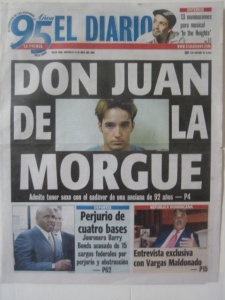 On May 13, a 25-year-old man was arraigned in a New Jersey court for having sex with the corpse of a 92-year-old woman in a Teaneck morgue. The case, which is already too bizarre and sick to digest, was not only picked by El Diario La Prensa as its lead story on May 14, but headline writers got a little too creative: “Don Juan of the Morgue” was the phrasing of choice. (Click on the image to see a larger picture.)

Last time I checked, Don Juan, the unrepentant womanizer, had a weakness for the ladies… the living ones. In fact, his “thing” was more about seducing women than merely sticking it in, if you know what I mean…

Daddy Yankee, who this year was awarded the “prestigious” Artist of the Year award by Harvard University, made a bunch of us forget our penas and hit the floor Wednesday night at People en Español’s Bellos party at Mansion. The reggaetonero took the opportunity to premiere Pose, the first official single from his new album Talento de Barrio: El Soundtrack, due to hit stores on July 15th.

— Lorena Rojas, whom you may or may not know, depending which Hispanic network you follow, was humble enough to remember this blogger, who shared the same crummy secondary school in Mexico City (Don’t tell anyone, but it was “La Secundaria 38, Josefa Ortíz de Domínguez, in the heart of la Colonia del Valle.) Her sister Mayra Rojas briefly dated my brother like a million years ago, when we were all very very young and silly… and in another planet.

–Univision’s news lady María Elena Salinas reminded this blogger that no matter how smart you are, you can still look very hot…

–On the other hand, Ninel Conde made me realize that, no matter how dumb or smart you are… if you have a good, solid pair of breasts you’ll be O.K. (What a bummer!)

—Bárbara Bermudo showed up at the party holding hands with her eternal fiancé, Mario Andrés Moreno. And for the 50th time this decade said they are planning to get married and have a baby sometime, like soon. Very soon.

—Dennise Oller, the former Univision newscast anchor and 5 time Emmy winner, was at hand and told us she is slated to appear weekly in a new television segment on Telemundo/Channel 47. Instead of doing the news, Oller will now be in charge of “A la mesa con Denisse,” a series of 5-minute segments that will air weekly on Wednesdays at 11:30am.

—Ray Rodríguez, Univision’s COO, and Mike Rodríguez, Telemundo’s vp of sales and marketing, managed to stay away from each other most of the time, even duping some people into thinking they are not related… much less that they are brothers

—El Gordo Raúl de Molina will soon have to think about re-naming his afternoon show with Lili Estefan, as he is now 60 pounds thinner. Shall we call the new program “El Flaco y la Más Flaca?” or maybe “El Nuevo y Renovado El Gordo y la Flaca” …Perhaps they will want to take a cue from the new, revamped Sábado Gigante and announce a major overhaul 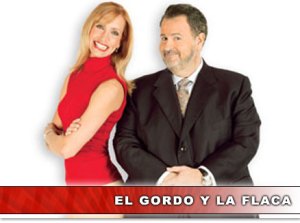 –And speaking of thin people, I was glad to confirm that -following up on my report of one year ago– both TVP’s Manny Vidal and Univision’s Otto Padrón are still in good shape, looking hot and keeping the extra pounds at bay. Alex, however, was nowhere to be found.

–And last but certainly NOT least: this blogger ended the night with a perfect finale at romantic Pier 76…. Alas, not on some famous person’s million-dollar yacht, but at the West 38th Street tow pound, helping my friend Nicole Raymond rescue her car from the hands of very mean-looking people. 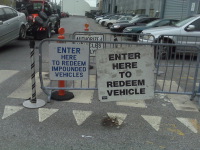 Ok you guys, I guess that’s it for now. I must go back and do some real sleeping writing.

Last year I told readers of this blog I would strive to become a sort of ‘El Gordo y la Flaca’ of Hispanic marketing and advertising, bringing them some juicy gossip and fun facts surrounding this ever exciting market. Well, this week was upfronts week in Manhattan, and although some big networks decided not to hold traditional presentations, I still had my share of cocktails, parties and -of course- the always ultra chic, popular and star-studded People en Español Bellos bash.

Still trying to figure out how to beat Univision in prime-time, Telemundo this week said it is working on a remake of El Clon, the successful Brazilian telenovela which it aired in 2002. Still my favorite upcoming project is Sin Tetas no Hay Paraíso, which NBC insists in translating as “Without Breasts There is no Paradise,” but from now on, I will call “No Tits No Glory.”

-Still trying to figure out how to continue its smashing ratings success among Hispanics, Univision said it is working on a revamped, reloaded, 360, all-new version of …. Sábado Gigante! Yep. The “new” sh

-And still trying to figure out what the hell is that it is supposed to do to compete with Univision and Telemundo, Azteca America decided not to hold an upfront this year. Instead, it opted for a series of client meetings around the country pitching its programming as proudly “Made in Mexico.” … Didn’t they proudly pitch a “Made in the U.S.” strategy last year? Ay caramba!

In the end, Univision managed to steal everybody’s thunder with a surprise -and very much appreciated- mini-concert by Shakira to close its presentation at Jazz Lincoln Center. 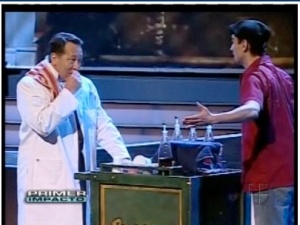 Joe Uva might not be fluent in Spanish (yet) but he certainly has a sense of humor and, unlike his predecessor, seems to enjoy the limelight and being onstage.

Joining the cast of In the Heights, Mr. Uva made his first appearance at the Univision upfront this week sporting a bata de piragüero and pitching -what else?- piragua sabor UVA.

Judging from Disney’s Beverly Hills Chihuahua official trailer, Aztecs, Mayans and Incas are all the same thing. Besides, it doesn’t really matter who your ancestors were or which pyramid country you are from. If you play a tambor and wear a colorful penacho, you qualify to be the real enchilada.

I wonder if Taco Bell will sign up as sponsor of this rubbish movie.