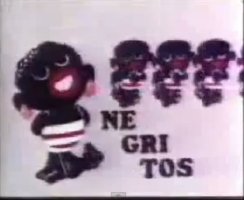 If you have ever been to Mexico, chances are you’ve eaten or at least seen a Negrito, an ubiquitous chocolate sweet produced by Mexican food giant Grupo Bimbo and sold pretty much in every tiendita around the country.

I ate one as recently as last month, and while the taste has not changed a great deal, its advertising has.

Check out the following commercials for Negrito Bimbo.
1983