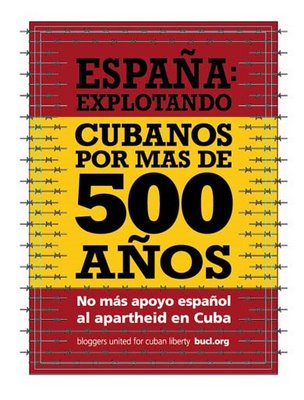 It turns out there is a “confederation of blogs” called Bloggers United for Cuban Liberty, and it also turns it has a lot of money … and does not like Spain.

At least that is what comes to light from a recent advertising effort targeting the Spanish government. The reason? According to these bloggers, the government of José Luis Rodríguez Zapatero is behind an effort to normalize relations between the European Union and Cuba.

The multimedia effort consists of several bus shelters located near the Spanish consulate and the Spanish Cultural Center in the exclusive area of Coral Gables, Florida. And according to the confederation spokesman (yep, it even has a spokesman!) it “marks the first of several coordinated activities aimed at exposing those countries, companies and institutions that aid and abet the Castro regime in oppressing the Cuban people.”

I wonder who these bloggers will target next. Perhaps it will be the 5-member delegation from the U.S. Congress who this week attended a U.S.-Cuba trade fair in Havana and even met with Ricardo Alarcón… Or they might want to get Matt Lauer, the NBC Today anchor, who will broadcast his show live from the island next Tuesday.

And while they’re at it, they might also want to get the French … I’m not sure why, but it seems it’s always popular to be anti-French.

Personally, all I want to know is how I can join a confederation and, more importantly, how I can have my own blog advertised on a bus shelter.

5 thoughts on “Florida bloggers to Spain: Zapatero a tus zapatos”