In the latest sign of people’s paranoia (and the fact that some of us just have nothing better to do) a group of enraged New York moms is demanding Fisher Price to pull this doll from the stores’ shelves. Why? Because she is calling the world to convert to Islam!!

Mmmmm, I wonder if they’re going to try to blame the Obamas for this one, too.

Click on the following video and judge it yourself.

Continuing a tradition of dumping Hispanic media and marketing coverage down the toilet around Hispanic Heritage Month, Nielsen Media has decided to throw the towel on Marketing & Medios, the online/Special Report hybrid it created upon folding the magazine I founded in July 2004.

The company has not yet made any announcement (and I doubt it will) but its Web site remained suspiciously abandoned for a week or so now. Insiders tell me that the company has eliminated Della delafuente’s position, and that Hispanic media and marketing will be covered on a freelance basis. Whatever.

I am -of course- pissed saddened by all this. It is as if my child was taken hostage, tortured, mutilated, burn and finally thrown to the wolves instead of just killing it already and be done with. As my favorite comedian, Jerry Seinfeld, would say: “You should just do it like a Band-Aid. One motion! Right off!” The company was never committed to covering the Hispanic market with cojones as we naively tried to do. Anyhow, I just hope this time will be for real. Quite frankly I don’t think I have the guts to see this thing die ad Eternum.

According to a study released this week by the Spanish Parliament, prostitution is down by between 30 and 40 percent, with Spaniards spending less and less on supporting the world’s “oldest trade.”

Reports the Associated Press: According to figures from Spain’s National Association of Brothel Owners, Spaniards spend around 50 million euros a day on prostitutes.

Wait… There is a National Association of Brothel Owners? Maybe we can suggest Mr. Michael Pinga to apply for a job there if he fails to reach the State Senate.

And it is no joke, my friends. Mr. Michael Pinga is running for the State Senate District 9, and he even has a Web page for you to go and check it out.

But wait! There is even a whole Pinga family, complete with Mrs. Pinga, two Pinga daughters and the family pet (let me guess: is the poodle’s name Dick?) 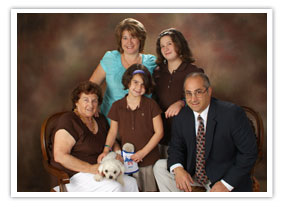 An image is worth a thousand words -and a reconciliation might be worth a lot of millions of Euros. According to the Italian edition of Vanity Fair magazine (above) Hayek and Pinault are back together. No mention of the mysterious blond who got into his pants captured his heart so briefly. Times are hard, so if you have a billionaire husband/lover/father of your child, think about giving him a second time. 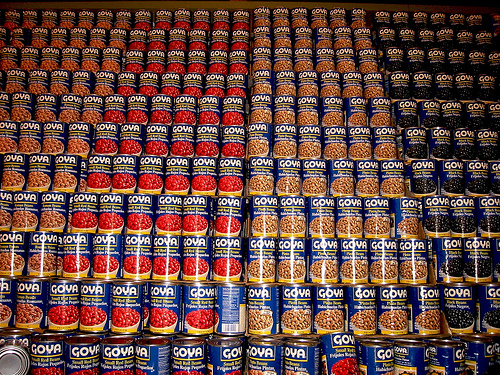 The economy might be going down the toilet but things are looking pretty peachy for Latino-owned Goya Foods, which is on track to generate $1 billion in sales this year.

“People tend to go back to the basics,” he said. “We’ve seen spikes in the sales of rice, beans and cooking oils. People aren’t eating out at restaurants, they’re cooking at home. That’s why we continue to grow,” Evelio Fernández, Goya’s vp told the press.

(So those out there who still blame immigrants for the financial mess should re-consider.) How dare they? 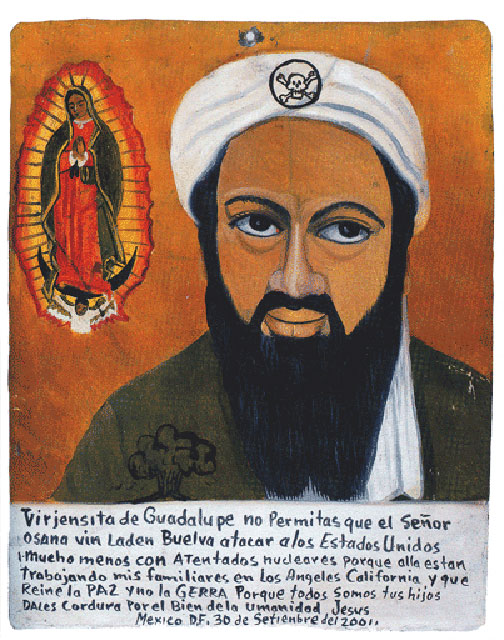 If you are remotely familiar with Mexican catholic fervor, you’ve probably seen exvotos adorning a church. An exvoto is an image offered to a deity or saint as a form of prayer or as a thank you for an unanswered prayer.

I’ve seen hundreds of exvotos in my life, but nothing quite like the above one, dated September 30, 2001 and loosely translated as follows:

“Dear Virgin of Guadalupe don’t let this guy Osana vin Laden [sic] attack the United States again, much less with nuclear weapons because I have family working over there, in Los Angeles, California; and may peace reign and not WAR, because we are all your sons. Give them good sense in behalf of humanity.”

There is not much to say here, except that New York City’s El Diario La Prensa summed up quite nicely Sarah Palin’s performance during Thursday’s debate.

In other words, she was, well, pretty much useless. 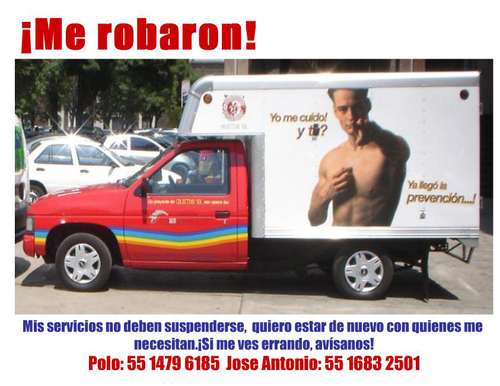 Ok people. Mexico City’s crime wave is just getting ridiculous. Despite having found the Condomóvil today, (which was stolen a few days ago) cops say a few things are still missing, including a stereo, an iPod, 5,000 condoms, 800 HIV tests and a giant, 7-meter inflatable preservative.

Could the robbers be so kind to give back at least the giant prophylactic? I mean, how far can you go with that thing? It’s pink, for God’s sake!