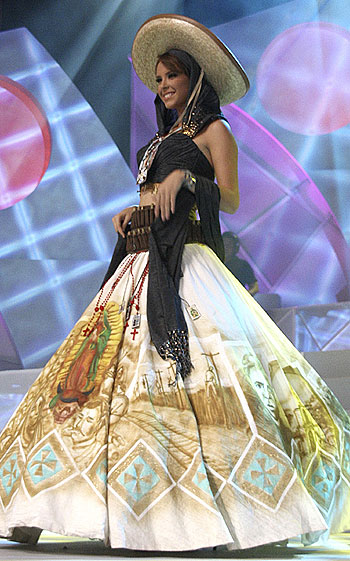 Politically correctness has finally caught up with my paisanos. So to avoid an escalating scandal, Miss Mexico will have to tone down her outfit.

But wait, it’s not that the dress set to be worn by Miss Mexico in the upcoming beauty pageant is too revealing. As it turns out, it’s too violent!: Among the images were Roman Catholic rebels hanging from posts, and a man facing a firing squad, all reminiscent of the 1929 Guerra de los Cristeros (Cristero War). The outfit was completed by rosaries and scapularies hanging from a bullet-studded belt, topped off with a crucifix necklace and a wide-brimmed sombrero.

Designed by Maria del Rayo Macias, the dress was chosen ahead of nearly 30 other gowns, in order, as the organizers put it, to represent Mexico’s culture and history. But now it will have to be redone. The new dress will now feature –what else?– images of the Virgin of Guadalupe and of women who participated in the Cristero War.
If you ask me, I’m not sure I’m outraged about the violent images… I would be ashamed to wear that thing only because it’s too tacky! or is it just me?

How about getting rid of the cristeros altogether and change the whole thing to a group of Mexicans crossing the border while being shot by the Border Patrol?

(Nah! I guess that will be deemed too progressive).