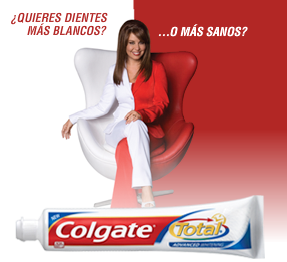 North Korea might be launching rockets all over the Pacific, but there’s plenty other stuff going on in the world.

For example: Colgate and the Hispanic Dental Association (yes, there is such a thing) this week officially declared April El mes de la salud bucal: un mundo de sonrisas saludables (Oral Health Month: A World of Healthy Smiles), because even if Latinos “overindex” in the use of video games and portable electronics, we are apparently not very neat when it comes to cleaning our teeth.

The official kick off took place last week in Miami, with the presence of several “Oral Health Month Ambassadors,” including Colgate Total’s spokesperson Myrka Dellanos, who was at hand to prove not only that she cares about your health, but that despite the mañas of her former husband, she still has a full set of teeth.