It was exactly eleven years ago when, after losing my dream job and feeling a bit disoriented as to what to do next, I decided to start a blog.

Looking back at my very first post, it is clear I had no idea what I wanted to do with with this space, but I did know that documenting the silliness of what marketers and media “experts” call the U.S. Hispanic market could be a fun adventure, especially if it were to be done with a sense of humor.

From hundreds of ridiculous television commercials (like that Tostitos one using a sevillana to peddle salsa, or that of a 36o-degree action camera that will help you spot a mariachi sneaking through the U.S. border) to those ubiquitous ethnic Halloween costumes and Hispanic paraphernalia, I’m sure I’ve made some of you spit your morning coffee more than once.

And that is why it’s interesting that this blog’s most popular post ever (in terms of both clicks and reader comments), was one that was barely a paragraph long; didn’t really say much and was not really funny, funny: It was an image of an Absolut Vodka print advertisement I saw in a magazine at the Mexico City hospital where I was — hopelessly — watching my mother die of lung cancer. The image made me smile (something I had not been able to do for several weeks, after learning my mother’s Stage IV cancer was incurable) mostly because I was positive it would never run in a U.S. publication. It showed a colorful map depicting what the Americas might look like in an “Absolut”  (i.e. perfect) world: The U.S.-Mexico border lies where it was before the Mexican-American War of 1848.

I ripped the page carefully, trying to not wake my mother and put it in my purse so I could write something about it later, in my blog, you know?

That plan was all but forgotten as my mom passed away on the morning of March 20, leaving me in a profound pain. (The story of how that apparently innocent ad crossed the Mexico border and made a ruckus in the U.S. was later published in Advertising Age, where I later became a regular blogger as well, and you can read it here.)

Anyhow, I mention all of this, because blogging has been a very important part of my life this past decade. It is true that I’m not exactly blogging every single day and that the new social media channels have made the very survival of bloggers really tough.

However, some of my writings here have taken me to very exciting places, including authoring my first book*, becoming a regular contributor to magazines, radio and TV shows and — of course — raising the ire of countless non-Mexicans who throughout the years have asked me — repeatedly — to go-back-to-where-I-came-from.

Eleven years later, I plan to continue using this space to vent and muse about “Hispanic Stuff” (whatever that means.) But be warned: Given the current political climate, I might also use it to try to give a voice to many who might feel threatened, scared and unwelcome in these dark times. I might not be the voice of reason, nor the most influential blogger out there, but I can yell pretty loudly –and I know how to wield my Mexican charm when needed.

So here’s to another eleven years of this, my blog, your blog… 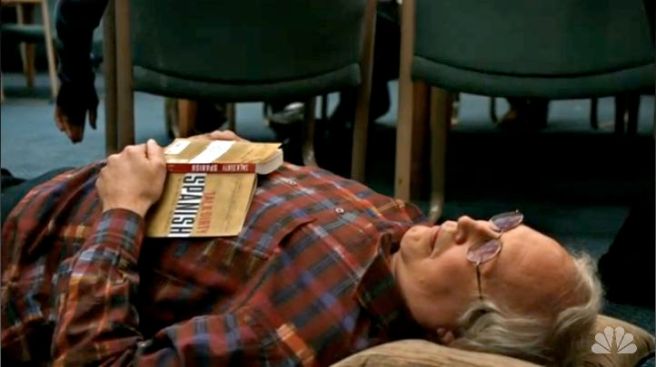 Ok, Ok, I might not be a fan of NBC’s Community (in fact, I never watched it before today.) But in a recent episode the character portrayed by Mr. Chevy Chase was featured falling asleep, bored out of his mind after apparently having read this blogger’s opera prima.

I mean… I am no Marcel Proust, but come on, Mr. Chase!… Why the mala onda? Couldn’t NBC pick on someone else? Or, as my mom used to say, ¡Póngase con uno de su tamaño! 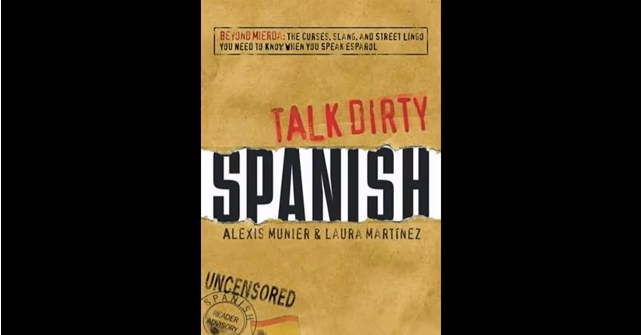 I don’t mean to brag, but you know? I wrote a book. Yes, a physical thing made of paper and ink, which was actually sold in Amazon.com and all, making it –at some point– to the New York Times list of The 500 Books You Will be Well Advised to Ignore (i.e. Not Buy.)

Anyhow, I did not make a penny out of the thing, but I had tons of fun co-writing it with the insanely funny Alexis Munier, an American nutcase imported from Switzerland, who came knocking on my Inbox many moons ago.

But I digress. It is with great delight [and thanks to the watchful eye of Diego Olivé] that I’m happy to see my opera prima reaching YouTube-celebrity status as important footage in this Lorrie Morgan & Sammy Kershaw rendition of He Drinks Tequila.

Here is Talk Dirty: Spanish, in all its literary glory.

So this morning, Piers Morgan tweeted this question to his 3.3 million followers:

Despite my being , super busy, I suggested the following:

This is what I got.

My grandmother used to say that la ociosidad es la madre de todos los vicios (Idleness is the mother of all vices.) While no one can ever dispute that, I would like to add a modern twist to her very wise insight: “Unemployment is the mother of all blogs.” (Of course, there’s also my friend Diego who says: “Idleness is the vice of all mothers,” but that’s a whole other story.)

Now that you’ve read this far, I might as well let you know who I am: I am a bilingual, not-yet-acculturated Mexican journalist and editor specialized in media, marketing and advertising. I’ve lived in a bunch of places, including Singapore, Buenos Aires, Mexico City, Paris, Santiago de Chile and New York City.

In my most recent position, I was the founding editor of Marketing y Medios, an English-language trade publication devoted to explaining the Hispanic market to a non-Spanish speaking audience of executives and marketers. I left that company in December of 2006, following its sale to a new owner.

Prior to my wonderful two and a half years there, I was responsible for creating and launching the Spanish-language edition of The Wall Street Journal, as well as coordinating and editing their Spanish-language Web edition at americas.wjs.com. Before joining the Wall Street Journal, I had worked as a reporter and editor for newspapers and magazines in Mexico, Buenos Aires, Santiago de Chile and Los Angeles.

And last but not least, I’d like to add that before graduating with a BA in Journalism at the Escuela de Periodismo Carlos Septien Garcia, in Mexico City, I completed my high-school education at the United World College of South East Asia in Singapore.

Throughout my career, I have developed extensive experience and industry contacts in journalism, marketing, and advertising. I am fluent in English, Spanish and French and have promised myself to take up Mandarin some time soon. You never know.