Today is Black Friday, the day Americans would go out of their way to buy stuff they don’t need, lured by the promise of paying less for said stuff.  I’ve always hated this so-called holiday, which pops up on my Apple Calendar (for some reason) mostly because the only thing I like to buy in life (food & alcohol) is pretty much never on sale.

This is why I’ve always been so fond of the dude in this pic (above.) I bet he works his butt off year round (Black Friday included) making sure his product moves by luring customers to the wonderful world of chicharrones on discount.

(Not my photo. Claim it if yours!)

Border Patrol CMO: We need to hire more Mexicans to help us patrol the border. But how do we do this?

Marketing intern: Let’s do a subtle, artsy reference to one of their favorite foods.

Border Patrol: That’s an amazing idea. You are hired!

Go ahead; wear green and go out get drunk or whatever it is you do this weekend. But don’t forget Saint Patrick’s Day is a celebration of the Batallón de San Patricio, which according to my extensive readings of history books, was a unit of hundreds of immigrants and expats who fought as part of the Mexican Army against the United States.

Now go get some green tequila and Irish tacos.

Mexican electoral authorities are calling on chilangos (as Mexico City residents are known) living abroad to take part in the 2010 election and vote for a “Diputación migrante.” What this basically means is that migrants hailing from the city capital will be able to cast a vote for representation at the Mexico City Congress.

And what better way to convince chilangos to take part than using some of the things that make our heart beat the hardest? Tacos al pastor; tortas de tamal and trajineras.

As Mexico’s Electoral Institute (INE) inform us on a dedicated Website, being a chilango without a voting document is equivalent to really dull things: Like a taco al pastor without pineapple; a guajolota (torta of tamal) without bolillo or a trajinera without a name.

This blogger will be taking some time off to embark on a  spiritual retreat to plan for the year ahead and thank my paisanos for all the hard work and for enduring stuff like this, this and this on a daily basis.

Also, I wanted you to know I’m officially kicking off the Guajolote-Reyes marathon, which runs from Thursday Nov. 25 and all the güey through January , 2022.

Looks like advocating for equality and social justice doesn’t go down well among some people. Take some Iowans, who found a sign posted outside a Mexican restaurant a little too… politically correct.

The story goes like this. Alfonso Medina, owner of La Carreta Mexican Grill in Marshalltown, Iowa, had placed the below sign outside his restaurant as a way to take a stand in favor of science, social justice, equality… crazy, right?

According to CNN, the offending sign brought lots of hate mail to Mr. Medina, including one letter that actually blew up on social media. Said letter came from a customer, who addressed Mr. Medina by name, said he had recently spent a lot of money in his restaurant but that –upon seeing the sign– he’d never eat there again. This person actually ended the misive by calling Medina “a leftist Marxist.”

Mr. Medina took to Instagram to respond by saying: “We’re sorry your burrito had to get political, but it was the only way y’all would listen.” The IG post ended with a bang: “No Love, No Tacos.” Then, just like any genuine “leftist Marxist,” would do, Mr. Medina copyrighted the No Love, No Tacos slogan; adopted it for his restaurant and even paid for a large billboard to display it.

Filing under Mexicans: How can anyhone not like us?

Chances are this blogger will be terribly busy working on Saturday, July 4, but wanted to let y’all know, I’m all up for diversity. So, without further ado, please enjoy this rendition of The Star Spangled Banner by one of many of the awesome mariachi bands found in Chicago.

Say what you will about my people (i.e. The Mexicans) but they truly know how to let off some steam without being, like, super violent.

Take this children’s party in Chicago, where tiny, adorable children (like this cutie in a Peppa the Pig shirt) are seing hitting an ICE piñata and throwing balls into a painted image of President Trump.

A video circulating around social media is stirring some controversy among “certain sectors” (presumably non-Mexican sectors.)

As for this blogger, I have only one thing to say: ¡Dale, dale, dale, no pierdas el tino, porque si lo pierdes, pierdes el camino! 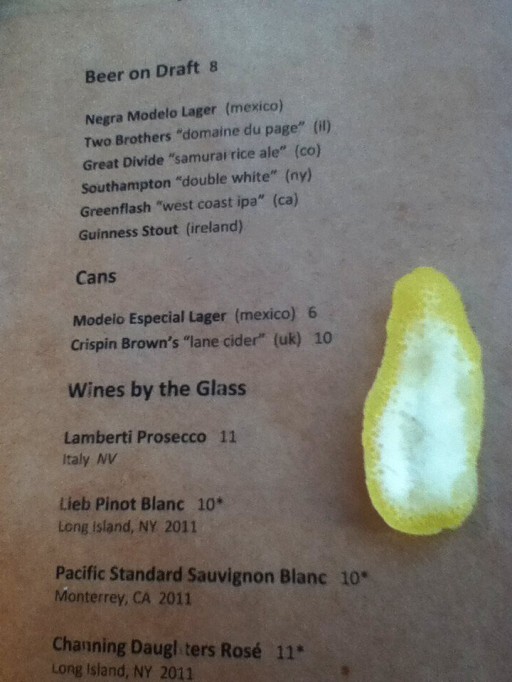 I was not going to be the only one not finding the Virgen of Guadalupe somewhere. This beauty showed up in -where else?- my dry Martini at a swanky New York City Terrace.

I was so attached to it, that I took it for a stroll. It was great. [And the beverage was delish] 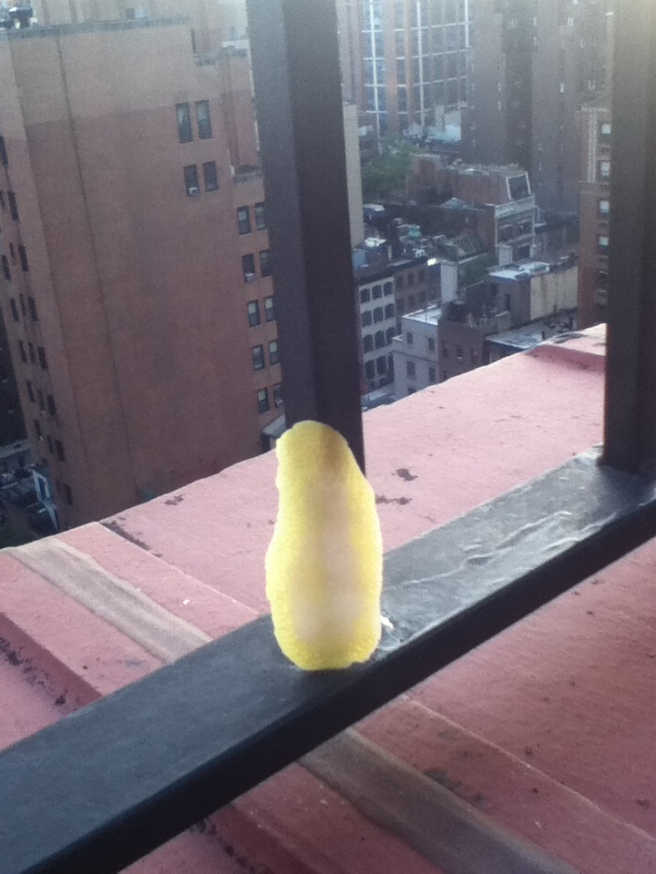 Say what you will about Texas (and I say a lot of not-so-nice things) but Democratic congressman Beto O’Rourke not only has a reported 62 percent of the Latino vote in the Texas senate race (vs. Rafael “Ted” Cruz) but he’s like a fan of this blogger’s FAVORITE Mexican band ever. Yes, Los Tigres del Norte have endorsed Beto and Beto and Los Tigres are, like, BFFs now.

Heck! he even tweeted in Spanish, so I’m like, dying here.

For the uninitiated, you can read this New Yorker profile of Los Tigres del Norte or simply click below. This is not the best video out there, but if you’re fortunate enough to understand Spanish, these lyrics are, like, WOW*…

Here’s my humble attempt to translate this song…

They already yelled at me a thousand times
That I must return to my land
Because there’s no room for me here
Well, I want to remind the gringo

They painted the line
For me to jump and now they call me an invader
It is a well-marked error
They stole eight states from us, who is here the invader?

And if history doesn’t lie
Here he sat in the glory, the mighty nation
Among brave warriors
Indians from two continents, mixed with Spanish

And if the story does not lie
Here he sat in the glory, the mighty nation
I entered brave warriors
Indians from two continents, mixed with Spanish

The Center for Immigration Studies, a so-called think tank I’ve never heard of, has published a very long report that basically concludes immigrants are illiterate and that Hispanics, in particular, “lag far behind other migrant populations in the U.S. when it comes to developing proficiency in English.”

The study, of course, was widely cited in several conservative publications, notably the Drudge Report (duh) and even gathered enough steam to call for an end of political correctness and launch a national Speak English Initiative.

“The importance of English literacy cannot be overstated,” wrote Jason Richwine, the author of the study and yet another person unknown to this blogger. “Without language proficiency, immigrant families will find it difficult to succeed in the mainstream of American society, and high rates of English illiteracy may be a sign of poor immigrant assimilation.”

In other words, as Mrs. Palin has warned us repeatedly: If you, people, want to be here… let’s speak American!

TAKE IT AWAY, SARAH!

I couldn’t make this stuff up if I tried.

The big news this week coming from the always brilliant Republicans is The Chapo Act, a proposal by — who else? — Cuban American dimwit Ted Cruz to have Joaquín “El Chapo” Guzmán to pay for a border wall.

But why? Well, because you don’t know this but El Chapo has many, many monies; more specifically, $14 billion in what look like beautifully crafted bills featuring his bald mugshot.

Here’s the original tweet sent out earlier this week by Cruz himself, just so you can see how hard it would be to make this sh*t up!

The US government is seeking the criminal forfeiture of $14B+ in drug proceeds & illicit profits from El Chapo. https://t.co/5SElazzr9X pic.twitter.com/wkIp10NEik

As I asked yesterday, shouldn’t a Chapo Act be an initiative to build tunnels and NOT walls?

But I get it. This is the Trump Administration, so nothing makes any sense anymore and we’re just going to have to go with it.

Take it away Golum!

Speaking of pussy assholes, a duo of advertising ladies are launching the Trump Hole Covers, some sort of weird device to cover your pet’s a-hole with a talking Donald Trump — because the world has definitely gone mad.

Behind this contraption (no pun intended) are Martha Ibarrondo and Evelyn Monroe Neill, two advertising ladies who have had it with with Donald Trump — pretty much like everyone else.

Per their very “intriguing” PR pitch:

“We’re amazed, disgusted, amused and inspired by the 2016 presidential election. We ask you to join in and share, share, share. Help us make #trumpholecover and #trumpcatasstrophy a phenom because really, if anyone ever deserved this place in history, it’s Donald Trump.”

I do not have a pet, but even if I did I’m not sure I would want to cover it’s a-hole with anything (much less with a talking Donald Trump). But apparently there’s something good in all this: According to Ibarrondo and Monroe Neill, your Trump hole cover purchase will support non-profit organizations that serve women and immigrants.

Not convinced yet? How about just doing it for the sarape -and sombrero-clad- pussy?

360fly Inc. has decided to launch a “provocative” ad campaign to pitch a camera that promises to give you a broader perspective of life.

To that end the company crafted what it’s supposed to be a satire of Donald Trump and his anti-Mexican discourse, speaking about his HUGE — yuge! — wall only to be interrupted by a bunch of Mexicans (mariachis, gardeners, maids and churro vendors) sneaking through the wall –aided by Clinton and Sanders.

Per a company press release:

The company claims the spot is “so controversial” it has been refused by a bunch of networks, mostly because stations said they wanted to “remain politically neutral” and “didn’t want to offend certain ethnic groups.”

As a member of one of the “ethnic groups” portrayed in this thing (watch below), I don’t find the commercial particularly offensive. However, I do find it a bit dull and that, my friends, offends me more deeply.

WATCH and decide for yourself:

Move over, cocaine-filled tamales. The new wave for smuggling drugs from Mexico into the U.S. consists of stuffing up burritos with methamphetamine.

In one of those instances, says the U.S. Customs and Border Protection:

A narcotics-detecting canine alerted officers to the presence of drugs and a search determined the woman was carrying more than a pound of methamphetamine in two packages that had been wrapped in tortilla shells to make them look like burritos.

As a proud chilanga who does not eat (and will never eat) a burrito, I can only cheer Customs officials for the feat, and remind my faithful followers of one important fact: Nothing good has ever come out of a burrito.