As if things were not already difficult for Hispanics living in America these days, local businesses are now trolling us with a supposedly funny t-shirt that takes a jab at Hispanics by questioning their legal status.

The above t-shirt –that takes a page from the popular Got Milk slogan–was spotted a few days ago in Ebony Mart, a popular shopping stop for Hispanics in Port Arthur, Texas, by local residents who found it outrageous –and definitely not funny.

As of this writing, the store owner had apologized and reportedly stopped selling said t-shirts, which I’m willing to bet are Made in either Mexico or El Salvador, two of America’s main exporters of cotton apparel.  🤷🏽‍♀️

A small brouhaha erupted this week on Twitter after @LeChanclé posted this image (left) and tagged the North Texas Municipal Water District (NTWD) with the following message:

“With so many Spanish speaking people in Texas, the @ntmwd  thinks it’s better to google translate their campaign than hiring someone to do the job. This ad makes no sense in Spanish.”

And he’s right. The text MAKES NO SENSE whatsoever, but to make matters worse, the agency quickly responded by saying the message had been translated from English by an advertising agency and that, well, “translations into other languages are never exact.”

@lechancle Thanks for noticing the ad promoting #waterconservation in Texas w/our partners @trwd_water & @savedallaswater. Sometimes translations into any language are not exact. We’ll keep this in mind for future posters so we can all help #savewater. 💦

Really NTMWD? One thing is to take some liberties to help the message get across but Agua Tejano? Mantenerlo en el grifo?  I’m not even going to go into the whole “agua is feminine” and all that, but get your act together. Fire your agency or something and help us save water –and a good human translator!

Some company in Texas wants you to celebrate the holidays with the ultimate Latin-inspired treat: Cinnamon crisp “mini-buñuelos,” which are not only cooked in 100% avocado oil, but are also paleo, vegan and gluten free… Just like the ones my abuela used to make!  –NOT. 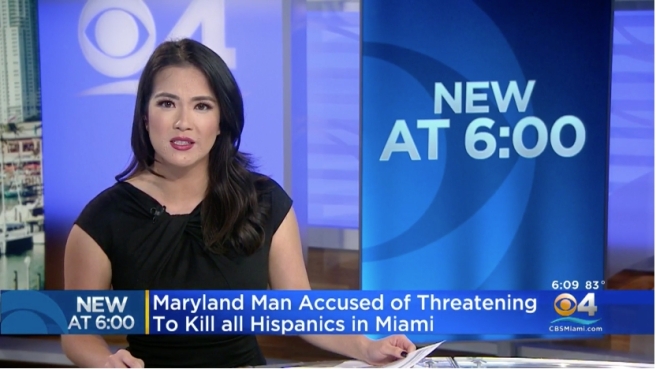 I’m not going to lie: These days –after many, many years living on this side of the border– I’ve become increasingly uneasy about doing things that I normally would do in public: Speak Spanish, wear hoop earrings, say outloud I’m Mexican a mucha honra, etc. etc.

The reason? As I keep saying on Twitter, being a minority in America used to be difficult, yes, but now it’s just plain dangerous.

Being Mexican in America used to be difficult. Now is outright dangerous https://t.co/9OEhStz7zS

Barely days after an anti-Mexican nutcase shot dozens of people in a Walmart in El Paso, Texas, many of them fatally, another member of the “I Am a White Dude Who Hates Hispanics” clan was arrested after making a series of social media threats against Hispanics in the Miami area.

According to multiple press reports, Eric Lin, a Maryland native, sent a bunch of threatening messages on Facebook professing his nazi beliefs, and vowing to exterminate the entire “Latin Race” [sic] which he also referred to as “rabid dogs.”

Unsurprisingly, Mr. Lin then went on to praise the “great president” of this nation, who as we all know kicked off his presidential campaign by calling us criminals, drug-dealers and rapists.

Former Texas congressman Robert “Beto” O’Rourke this week officially launched his presidential campaign Website but despite touting the slogan Beto for America that he uses for his English-language page, he decided to go for a combination of Beto para Estados Unidos and Beto para todos (Beto for Everyone) in the Spanish-language one.

So, this is all great señor Beto, now … Where are the free donas?

Another day, another drunken, monolingual moron in America feels threatened by people speaking Spanish around them.

In the latest episode of an increasingly common occurence, a man in El Paso, Texas claiming to be a war veteran goes off on a local woman for speaking Spanish to… her mom.

“This is America… We speak English here! Why don’t you speak English?” says the man, who according to local media, is a war veteran from Wisconsin.

I’m sure the incident was very upsetting for the women, but the exchange quickly turns quite hilarious as the woman’s mother starts yelling back at the man… not in English or Spanish, but in Spanglish.

“Como vas a estar tomando beer in the morning?  Puto!”

The whole exchange is a bit ridiculous (and innecessarily long, if you asked me) but watch it below if you’re so inclined… SIGH.

Robert Ellis, a Houston-native, has written a song about the deliciousness of…. Topo Chico, that other Mexican import that –along with avocados– has swept Americans off their feet.

The song is called –what else?– Topo Chico and it’s, well, an ode to the greatness that is a freshly-opened bottle of Topo Chico … with a little bit of lime.

Listen to this thing … if you dare.

Say what you will about Texas (and I say a lot of not-so-nice things) but Democratic congressman Beto O’Rourke not only has a reported 62 percent of the Latino vote in the Texas senate race (vs. Rafael “Ted” Cruz) but he’s like a fan of this blogger’s FAVORITE Mexican band ever. Yes, Los Tigres del Norte have endorsed Beto and Beto and Los Tigres are, like, BFFs now.

Heck! he even tweeted in Spanish, so I’m like, dying here.

For the uninitiated, you can read this New Yorker profile of Los Tigres del Norte or simply click below. This is not the best video out there, but if you’re fortunate enough to understand Spanish, these lyrics are, like, WOW*…

Here’s my humble attempt to translate this song…

They already yelled at me a thousand times
That I must return to my land
Because there’s no room for me here
Well, I want to remind the gringo

They painted the line
For me to jump and now they call me an invader
It is a well-marked error
They stole eight states from us, who is here the invader?

And if history doesn’t lie
Here he sat in the glory, the mighty nation
Among brave warriors
Indians from two continents, mixed with Spanish

And if the story does not lie
Here he sat in the glory, the mighty nation
I entered brave warriors
Indians from two continents, mixed with Spanish

If you are not Hispanic or –like me– are not a fan of rap, chances are you have never heard of Chingo Bling, but he has a new single out and it has the best title ever. They Can’t Deport Us All features a comedic take on the always exciting Migra vs. Mexicans action at the border. (According to several press reports, there are people who were not pleased by the name of this album, but what are you going to do?)

The lyrics are also funny –and racy– as hell. Take a listen and remember: They Can’t Deport Us All.

Want to say I love you, but you’re shy and/or not sure how to go about it?

Worry not. Tex-Taco, a taquería in Katy [SIC] Texas, has a very romantic, albeit expensive, solution: A $20 heart-shaped quesadilla, most likely the quickest way to your lover’s panza, I mean, heart.

From the always-creative #SpanishFail Texas signs and advertisements, comes the “Corazon [sic] Latino Dance Fitness” in Austin, where you can go dance until you lose not one, nor two, but 20 “bolas!”… 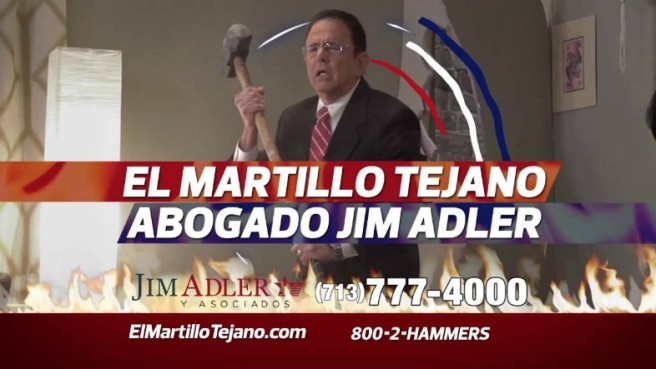 Who cares if switching to Geico can save you 15 percent or more on car insurance?

If I were to have a car — or live in Texas — (both very unlikely scenarios) I’d totally call Jim Adler, aka El Martillo Tejano, who promises to protect my people (i.e. The Hispanics) from sleazy insurance companies and give us the most compensation possible in case of a car accident.

Watch Adler inform us about his services in the best Gringo-Spanish I’ve heard in a while.

Take it away Jim! 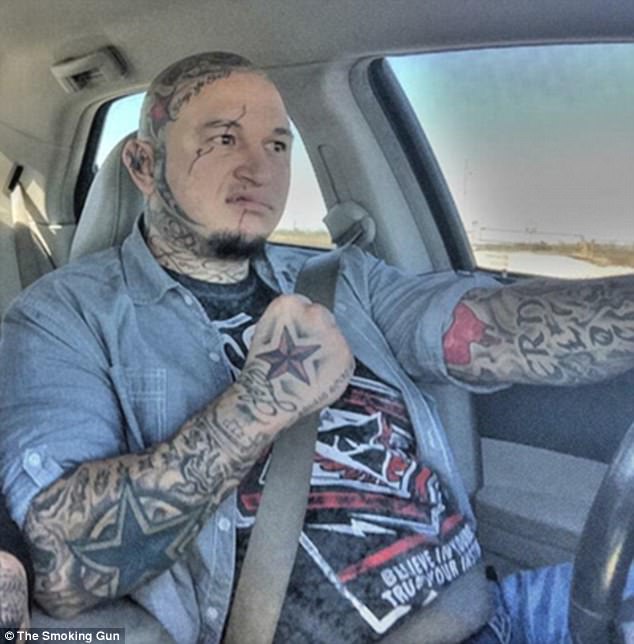 A 34-year-old Mexican-American dude who brands himself “The Undeportable One” is such a fan of you-know-who that he decided to change his surname to… Trump. The move, mind you, was approved by a judge.

According to The Daily Mail:

“Heavily tattooed Ernesto Baeza Acosta filed a petition to change his name to Ernesto Trump, and called on the President to invite him to the White House.”

Apparently this dude is also into making videos (see one below) and in a recent one you can see him proudly saying:

Oh, and just in case you were wondering: All this happened in — where else? — TEXAS!

Anyhow, I’m like super busy but must keep laughing…..

Via: DailyMail, what else?

Hispanics might have found the perfect way to make politicians think twice before taking away their rights and/or implement some BS anti-immigration legislation: Cut down their salsa *and* guacamole supply.

That was in full display earlier this week in Austin, when dozens of Hispanics protested outside state Rep. Matt Rinaldi’s office after he threatened to “put a bullet in one of his colleague’s head” during a scuffle over SB 4, the state’s new anti-“sanctuary cities” law.

But that was not all. According to several press reports, Rinaldi also told Texas democrats in the House that he had called ICE officials on Hispanic activists and wanted them all deported and stuff.

This, of course, didn’t sit well with my people, who retaliated with the most powerful tool at their disposal: By pledging to cut down the supply of salsa, guacamole and other delicious “Hispanic goods” to offending legislators.

So… U.S. politicians have been properly warned: They’d better think twice before messing with Latinos. It’ll be, like, No salsa, No Guacamole for YOU!

A new change.org petition wants Texans to embrace the taco as a new official state symbol, because — as everybody knows — the taco is a waaaay more diverse dish than chili, the state dish of Texas since 1977. (Think about it: You can actually put chili in a tortilla and… call it a taco!)

So, yes, I’m 100 percent behind these folks’ claims about the wonderfulness of tacos (how could I not be?) but before I sign this petition, I just have a quick question:

When are we (the Mexicans) expected to get the state back?**

** Thank you in advance for your prompt response