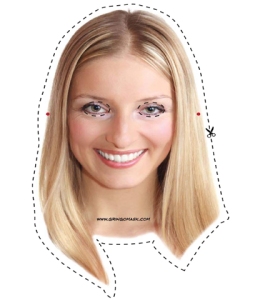 Well, turns out it is no longer out there.

Apparently, yielding to criticisms by some gringos who didn’t like Zubi using the word gringo to describe gringos, the agency this week pulled it off the Web, replacing it with an explanation of what the mask intended –and didn’t intended to do.

I think Zubi doesn’t care what I think… but I think it shouldn’t have yielded to the pressure. The mask was not only funny; it was one of the very first attempts I’ve seen from a Hispanic ad shop trying to push the envelope and make a strong –yet witty- statement about one issue that touches the nerve of the very market they are supposed to serve (immigrants, specifically U.S. Hispanics).

Only the ignorant would take offense: the mask was a comical tool to show that we (non-gringos) know very well that “gringos” come in all shapes and colors. And no, I do not think the word “gringo” is a racial slur.

I don’t know you, but I was among the lucky ones who managed to download my gringo mask. You never know when you’re going to need it!

One thought on “Zubi Gets Cold Feet About the ‘Gringo Mask’”