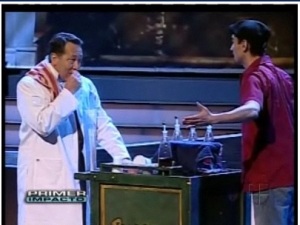 Univision CEO Joe Uva has left the company to “be able to seek other opportunities,” Univision announced today.

But what’s really weird is that they don’t want to tell me where the hell it is that he is going, and rumor has it that he might have gotten the boot. His last day is April 2.

I don’t know you guys but I feel a bit sorry for the guy. After all those years of tireless work and efforts, he didn’t even have time to master his Spanish… But he shouldn’t worry too much. Judging from his stellar appearance as a piragüero in one scene of the hit Brodway show In the Heights, I’m sure he’ll be able to find a gig in the barrio.

Buena suerte, Mr. Uva. I’ll look you up among my neighborhood’s piragüeros.