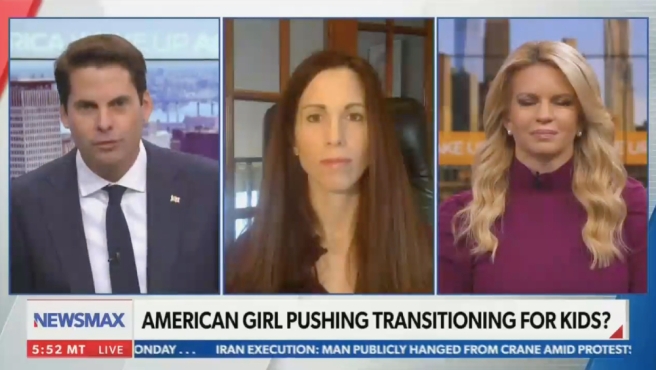 First things first: I do not watch Newsmax, and quite frankly I wouldn’t even know how to since I don’t have cable TV.

However, I couldn’t help but flagging a clip I found online about Rob Finnerty, a poor white television host who can no longer find an American Girl doll that looks like his daughter, because the popular doll brand has been … wokeified.

“My daughter is just a cute little 6 year-old white girl – we couldn’t find anybody that looked like my daughter. It was — the whole place, it was, like, wokeified”

Funny how the existence of a few black and brown dolls in a world where white dolls rule still triggers this kind of panic in white, right-wing folks.

Get yourself together, Roberto, we’re not that scary!

As y’all probably know by now, on June 24, 2022, the not-so-Supreme Court of the United States decided to overturn Roe v. Wade, effectively ending the constitutional right to an abortion after almost 50 years.

This – obviously – sucks for millions of American women, especially those in 13 states where abortion has immediately (or will very soon) become illegal following the ruling.

One of such states is Texas, which will soon initiate a so-called “trigger law” that will make performing abortion a felony.

Wanna know how bad this is? Under Texas’ law, an abortion provider could face life in prison –yup, LIFE IN PRISON – and fines up to $100,000 if they perform abortions or help facilitate one. The same goes in other nutcase states, including Idaho, North Dakota, Utah, Wyoming, South Dakota, Missouri, Kentucky, Tennessee, Oklahoma, Louisiana, Arkansas and Mississippi.

And all this brings me to the reason of this post (and the end of my ranting): A small, but thriving, safe heaven in Northern Mexico awesomely named La Abortería, where two women are determined to help Mexicans get access to safe, affordable, medically induced abortions.

The plot twist here, is that the founders of La Abortería are already bracing for an influx of Texan women seeking help –as we’re all assuming nobody wants to spend life in prison for not wanting a baby, right?

According to Bloomberg Law, while the Mexican abortion networks had helped one or two Texans a year, now they’re helping about five Texas women a week get medical abortions. Of course, I’m aware this great option is not open to all, and it requires people travel, leave their work, kids, etc. for a while to go get help in another country.

And this, my friends, is yet one more reason to be enraged. The end of Roe is not the end of abortion in America; it’s the end of safe abortions for the not-so-rich, Americans. 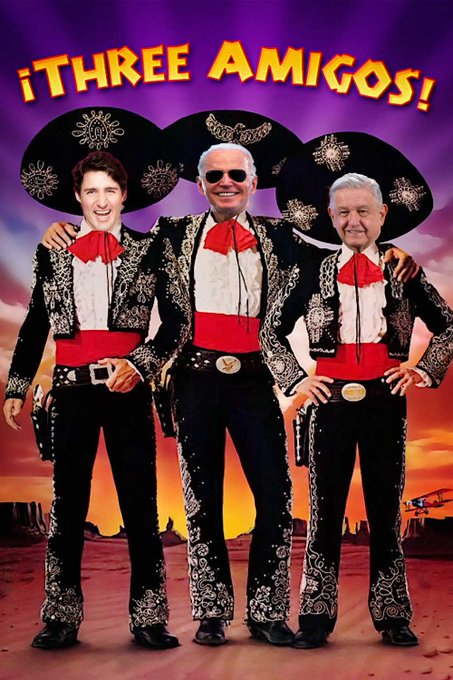 I haven’t followed this week’s #ThreeAmigos Summit as closely as in previous years (you know? I’ve been super busy .) Still, my timeline is an amusing patchwork of mariachi-wear jokes & cartoons. Some are good, some are great (see below), some are … meh (see above.)

Critizing the sombrero stereotype? Who has the energy any more?

Remember when Ann Coulter promised to go to outer space and never come back? Well, not only she didn’t go anywhere, now she’s back yapping against the Spanish language –yet again.

Go ahead; wear green and go out get drunk or whatever it is you do this weekend. But don’t forget Saint Patrick’s Day is a celebration of the Batallón de San Patricio, which according to my extensive readings of history books, was a unit of hundreds of immigrants and expats who fought as part of the Mexican Army against the United States.

Now go get some green tequila and Irish tacos.

Today in our always popular section Mexicans, How Can Anyone not Like us? I give you Dr. Ricardo Madrigal, whose urology clinic specializes in non-surgical penis enlargements and fixing other virile malfunctions. Judging from Dr. Madrigal’s marketing tactics, he’s not the one to beat around the bush when it comes to promoting his services.

“IT’S NOT THE COLD; THAT’S JUST THE WAY IT IS!” reads a recent billboard in Mexico captured by a Reddit user.

In addition to huge signs along local highways Dr. Madrigal is also very active on Facebook, where you can find tons of other incredible Christmas promotions.

Just in time for the holidays. Yay! 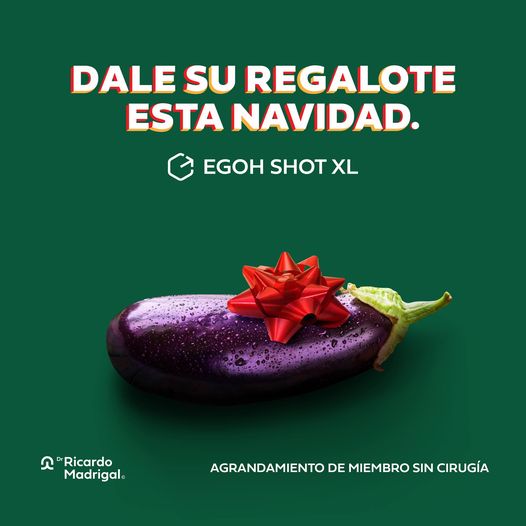 Remember that nonsensical trend of putting “eñes” where they don’t belong just to make something look –and sound– more authentically “Latino?”

Well, it looks like salsa makers and Hispanic journalists organizations are not alone in this thing. The latest to jump on the nonsensical “eñe wagon” (or should I say “wagoñ?”) is The Hispanic Star, a non-for-profit organization that seeks to “raise awareness of the contributions of the Hispanic community to the United States.”

According to its latest mailer, the Hispanic Star wants us to SAVE THE DATE and celebrate the 2020 Hipanic Heritage… Mñnth [SIC] which I believe it’s nonsense English for the word “month”.

I get it. As we approach the dreaded Hispanic Heritage Month, corporations, politicians and NGOs want to sound all cute and Latin in order to properly pander to my people, but how about learning first to put the “eñe” where it DOES belong? Like in “jalapeño?” for example?

Oh, and don’t get me started on #ItsPoblanoNotPoblaño

What better way to celebrate Frida Kahlo’s upcoming birthday than… by making a book to find her as we go about finding Waldo?

Publisher Laurence King is busy promoting Find Frida, a new book by Catherine Ingram (illustrated by Laura Callaghan) which promises to immerse the reader in the colourful world of Frida Kahlo using “twelve intricately drawn scenes, each detailing a key aspect of her life – from her eccentric teenaged years and infatuation with Diego Rivera, to her dynamic arrival as an international artist, her incredible studio and house in Mexico and her deep love of Mexican culture.” All of this for only $17.99 a copy.

I’m not sure she would be thrilled about the idea, but then again, who cares? Communist-loving Frida has proven to be a money-making machine for many non-communist companies that this might also be a hit.

On your mark… Get Set… Find Frida! 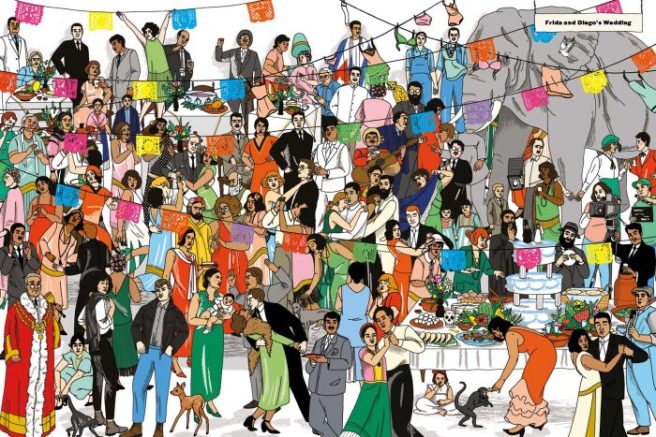 Speaking of culturally-relevant things… there’s a Veggie Taco Plush Set, which for “only” $49 promises to educate your child on the goodness that naturally comes with tacos, including some packets of questionable salsa; slices of avocado and even some cilantro to sprinkle here and there. 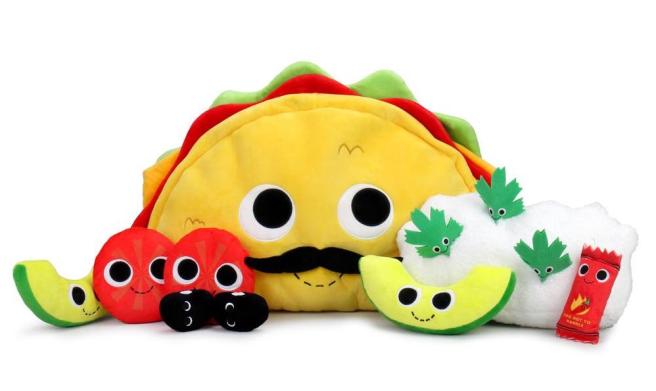 According to the description on the Kidrobot webside, the Victorio Veggie Taco Plush set,  “zips open to reveal the whole happy musical gang including backup singers Celia, Sylvia, and Sam Cilantro, Alejandro & Abigail Avocado on the strings, the Tambourine Tomato Twins, the hottest drummer in Yummy World Larry the Hot Sauce Packet and of course the infamous Bean Brothers on the horns.”

Ventura County explaining how much distance is needed to maintain social distancing. English = Skis; Spanish =3 crates of produce, because –as everyone knows– whites ski, while Hispanics do the “picking thing.”

As every Mexican knows, in any good Lucha Libre match, the one who loses their mask pretty much loses the fight.

With this premise in mind, advertising agency d’expósito & Partners has launched “Lucha vs. El Virus,” a PSA campaign aiming to engage Hispanics to protect themselves against COVID-19 and comply with public health practices during the pandemic, which has severely hit the Latino community in the U.S.

“We played with the double meaning of the Spanish word lucha,” Paco Olavarrieta, CCO at d expósito & Partners, told ADWEEK. “On one hand, lucha means to fight or to struggle and is used figuratively to express that one is working hard or continuing in the fight. On the other hand, lucha is embedded in the name lucha libre, where luchadores wear masks to hide their true identity.”

A Spanish-language PSA has been running on Univision, Telemundo and CNN en Español, while an accented English version of the video just got picked up by NBC and CNN.

The same spot is also available in an accented English version, which you can watch below: 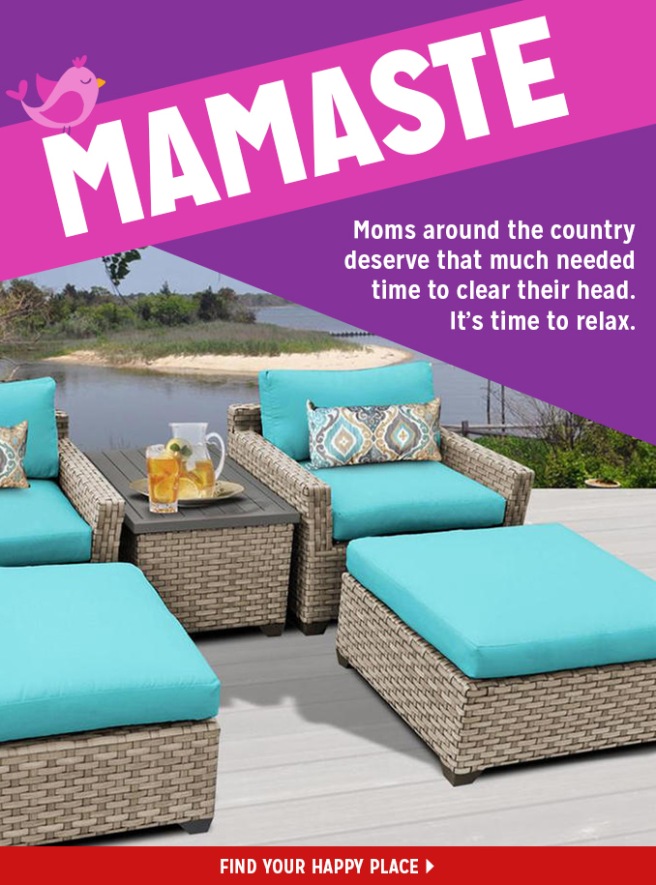 Picture this. A two-piece comfy sofa; a soothing image of a lake and a small, deserted beach on the background; a pitcher of delicious ice-tea and then your lovely mom … sucking someone –or being sucked by someone– for some reason.

That is pretty much the takeaway for so many Spanish-speakers out there who could not help but notice the gaffe in Kmart’s latest Mother’s Day campaign. The problem here lies in the choice of the word Mamaste, which –apparently– is supposed to be a play on words between Mom & Namasté, inviting mothers to Find their happy place and relax on Mothers Day. But while Namasté might be a term well-known among the yoga community, Kmart would be well advised to consider what “Mamaste” actually means in Spanish.

OK, I get it. They don’t want to spend money on hiring pesky bilingual copywriters, but they could have just turned to Google Translate instead. I mean. It’s FREE! it’s easy; it’s right… there. How lazy are they?

And this is only the tip of the iceberg. As my friend J.C. Maya discovered, there’s even a book (on sale in Target) with the same title: Mamaste: Discover a More Authentic, Balance, and Joyful Motherhood from Within,

Oh and did I mention these t-shirts?

Say what you will about my people (i.e. The Mexicans) but they truly know how to let off some steam without being, like, super violent.

Take this children’s party in Chicago, where tiny, adorable children (like this cutie in a Peppa the Pig shirt) are seing hitting an ICE piñata and throwing balls into a painted image of President Trump.

A video circulating around social media is stirring some controversy among “certain sectors” (presumably non-Mexican sectors.)

As for this blogger, I have only one thing to say: ¡Dale, dale, dale, no pierdas el tino, porque si lo pierdes, pierdes el camino! 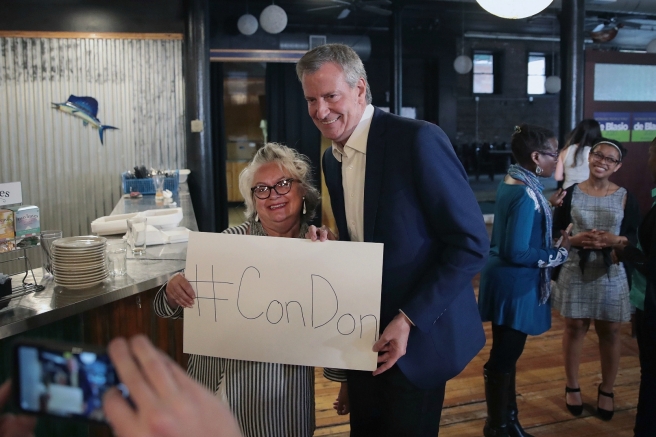 Ever since he announced he’s running for president in 2020, New York City Mayor Bill de Blasio has been using a very special hashtag in the hopes it will go viral. Nothing wrong with tapping on the power of social media to get traction, except that the hashtag in question is –wait for it– #ConDon.

Not only he has posed alongside supporters holding a #ConDon sign, but he’s even sending out very special mailers (below) asking Americans to contribute and support his campaign. Apparently, De Blasio’s #ConDon thing has something to do with Donald Trump, but I will never know because every time I read #ConDon, I cannot help but think about these things.

One thing, though, Mr. De Blasio: If you’re going to advocate for people wearing preservatives… use an accent over the “o” will ya?

We’re coming for you, #ConDon pic.twitter.com/l0EujCt007